The rare Borneo Bay Cat (Catopuma badia) is endemic to Borneo where few sightings have been recorded, even during research studies focused on felids. The Bay Cat appearance is similar to the Asiatic Golden Cat, with variable plain coat colors and facial markings, just smaller in size. The species is also likely dependent on forest habitat and thus threatened primarily by increasing deforestation on the island. Other threats include poaching for the wildlife and pet market due to the cat's rarity.

~ Very rare - only occurs on Borneo ~ 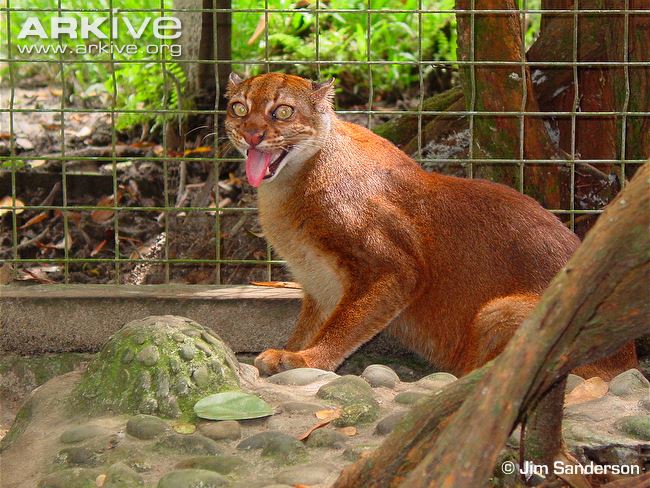 The Borneo Bay Cat has been described as a monotypic species (no subspecies) in the past and the last Felidae taxonomic revision in 2017 continues with this classification. At times this cat has been classified under the Pardofelis genus as Pardofelis badia.

The global conservation status for the Borneo Bay Cat is Endangered (EN) and the population is declining.

At this time there appears to be no active projects focused on this species, however the following organizations are dedicated to research and conservation in the region and other small cats:

Please support these organizations with their important work. No matter the size of your contribution, every bit helps! 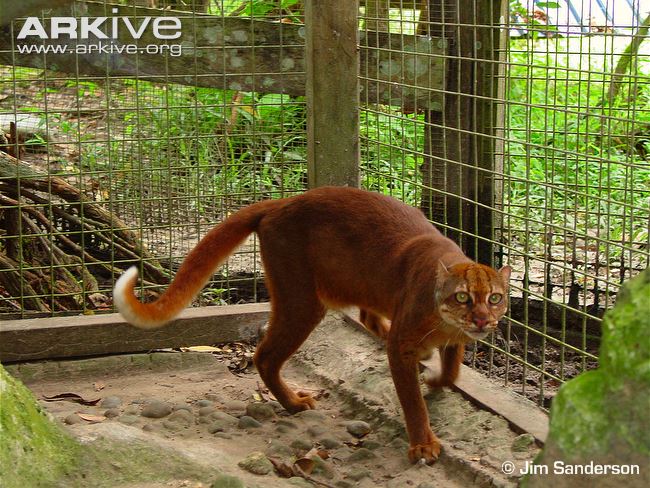 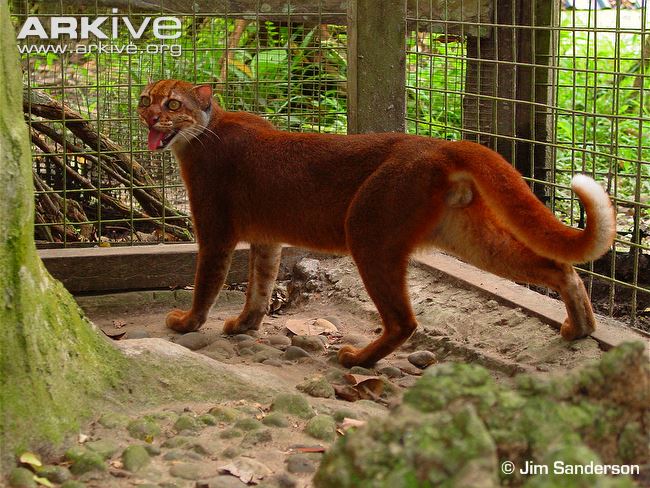 The following websites have well researched and authoritative information on Borneo Bay Cats:

Here is a list of papers published on Borneo Bay Cats. Click on the title bar to view the abstract and the link to the article.

Camera trap survey data of 10 years (2008-2018) from the first site in Sebangau provide details about the temporal partitioning of these small cats from each other but overlap with Sunda Clouded Leopard (Neofelis diardi). The activity of Flat-headed Cat was higher after midnight and that of Leopard Cat at night with no clear preference before or after midnight. The Marbled Cat is predominantly diurnal, but the remaining three cats have flexible activity periods. While limited data are available from Rungan, the second site, we confirmed the presence of all four small cat species found on Borneo, though we have insufficient data to comment on the Bay Cat.

The cat sightings, however, are intermittent and may reflect the unprotected status of this forest. Leopard Cats appear relatively unaffected by habitat disturbance based on encounter rates on camera traps. Conservationists, both NGOs and the government, must pay particular attention to specialists like Flat-headed Cats and Bay Cats when assessing habitat suitability for long-term cat conservation.

The bay cat Catopuma badia is a small cat endemic to the tropical forests of Borneo. One of only seven cats to be listed as Endangered by The IUCN Red List of Threatened Species, the bay cat is seldom seen, rarely photographed and is widely held to be one of the least known of the world's wild cats. Consequently its distribution is known only poorly, hindering efforts for its conservation.

Here we use MaxEnt niche distribution modelling to make predictions regarding its current distribution on Borneo. We collected a total of 71 occurrence records for the bay cat, stemming from all Bornean regions apart from Brunei and South Kalimantan, of which 40 were used in our modelling.

Our habitat suitability modelling predicts that an extensive, contiguous area of interior Borneo, much of it hill forest, but also containing lowland and submontane forest, is suitable for the bay cat, supporting an earlier hypothesis that this cat is widespread across the island. Extreme lowlands, supporting mangrove and swamp forest habitats, were typically predicted as low suitability, as were the considerable areas of Borneo now converted to oil palm plantations.

Based on the current predicted distribution we provide a list of priority areas for the conservation of the bay cat across Borneo.

2016 Two species of southeast Asian cats in the genus Catopuma with diverging histories: an island endemic forest specialist and a widespread habitat generalist

Background. The bay cat Catopuma badia is endemic to Borneo, whereas its sister species the Asian golden cat Catopuma temminckii is distributed from the Himalayas and southern China through Indochina, Peninsular Malaysia and Sumatra. Based on morphological data, up to five subspecies of the Asian golden cat have been recognized, but a taxonomic assessment, including molecular data and morphological characters, is still lacking.

Results. We combined molecular data (whole mitochondrial genomes), morphological data (pelage) and species distribution projections (up to the Late Pleistocene) to infer how environmental changes may have influenced the distribution of these sister species over the past 120 000 years. The molecular analysis was based on sequenced mitogenomes of 3 bay cats and 40 Asian golden cats derived mainly from archival samples. Our molecular data suggested a time of split between the two species approximately 3.16 Ma and revealed very low nucleotide diversity within the Asian golden cat population, which supports recent expansion of the population.

Discussion. The low nucleotide diversity suggested a population bottleneck in the Asian golden cat, possibly caused by the eruption of the Toba volcano in Northern Sumatra (approx. 74 kya), followed by a continuous population expansion in the Late Pleistocene/Early Holocene. Species distribution projections, the reconstruction of the demographic history, a genetic isolation-by-distance pattern and a gradual variation of pelage pattern support the hypothesis of a post-Toba population expansion of the Asian golden cat from south China/Indochina to Peninsular Malaysia and Sumatra. Our findings reject the current classification of five subspecies for the Asian golden cat, but instead support either a monotypic species or one comprising two subspecies: (i) the Sunda golden cat, distributed south of the Isthmus of Kra: C. t. temminckii and (ii) Indochinese, Indian, Himalayan and Chinese golden cats, occurring north of the Isthmus: C. t. moormensis.

View more articles on Catopuma badia in the IUCN Cat Specialist Group database (scroll down once the library page is loaded to see the list).