The beautiful thickly furred Canada Lynx (Lynx canadensis) is one of the few cat species that still have healthy populations in its remote range in Canada. Nevertheless due to trapping for their luxurious fur, populations have declined in southern areas where they were less abundant and local protection measures have become necessary.

Canada Lynxes, sometimes called Canadian Lynxes, are endemic to North America and their numbers are intricately tied to population cycles of their primary prey - the snowshoe hare.

The scientific name for the Canada Lynx is Lynx canadensis; which is also known as the binomial name, species name, Latin name, biological name or zoological name. 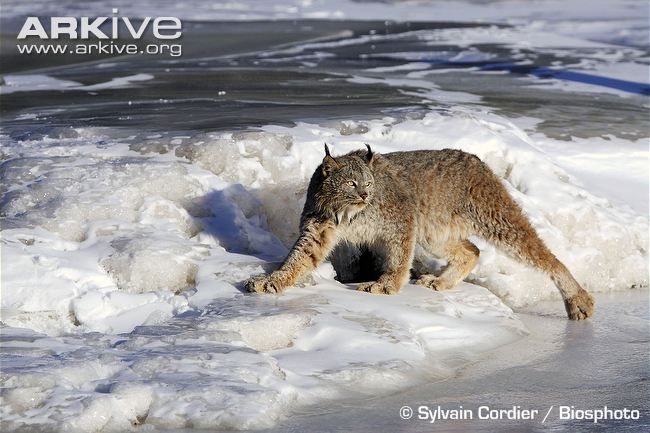 The Canada Lynx is a monotypic species and as per the last Felidae taxonomy revision in 2017 there are no recognized subspecies.

The global conservation status of the Canada Lynx, also known as Canadian Lynx, is Least Concern (LC), but the cat is listed as "Endangered" and "Threatened" under local legislation in some parts of its southern range.

The following organizations are involved in protecting the Canada Lynx by ensuring harvesting is sustainable in Canada, and to mitigate further declines due to excessive trapping, habitat destruction and fragmentation in its southern range. 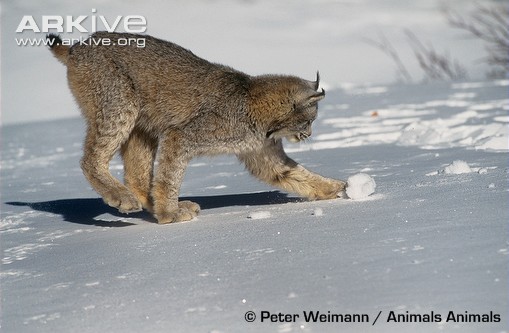 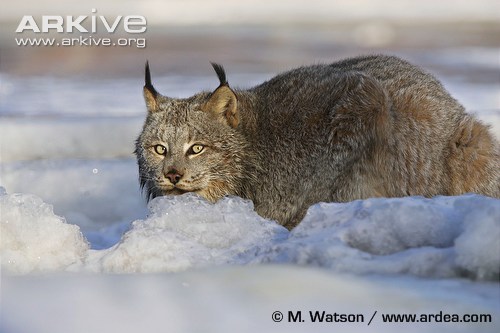 The following organizations have well researched and authoritative information on the Canada Lynx:

These documentaries and video clips about the Canada Lynx are currently available on YouTube.

Apologies if any links are broken as videos are removed from time to time. If so, search for the video title to find if it is available elsewhere.

*Year published on YouTube when no year given in the video.

Here is a list of papers published on Canada Lynxes. Click on the title bar to view the abstract and the link to the article.

The Canada lynx (Lynx canadensis) and the bobcat (Lynx rufus) are closely related species with overlap at their range peripheries, but the factors that limit each species and the interactions between them are not well understood.

To compare this fourth-order habitat selection by the two species in an area of sympatry, we tracked lynx and bobcat during the winters of 2017 and 2018 on the north shore of Lake Huron, Ontario.

We found that both lynx and bobcat selected shallower snow, higher snowshoe hare abundance, and higher amounts of coniferous forest at the fourth order. However, the two species were spatially segregated at the second order, and lynx were found in areas with deeper snow, more snowshoe hare, and more coniferous forest.

Taken together, our findings demonstrate that the lynx and bobcat select different resources at the second order, assorting along an environmental gradient in the study area, and that competition is unlikely to be occurring between the two species at finer scales.

Forest managers are often tasked with balancing opposing objectives, such as altering forest structure and conserving forest-dwelling animals. Consequently, to develop holistic strategies managers require information on how forest manipulations influence species of conservation concern, particularly those that are federally threatened or endangered.

Here, we characterized how differing silvicultural treatments (n=1,293 - forest thinnings; removal of small trees, selection cuts; trees harvested in small patches, and regeneration cuts; clearcuts of nearly all trees) influenced the resource use of a threatened forest carnivore, Canada lynx (Lynx canadensis), over a temporal gradient of 1-67 years after treatment. To do this, we used an extensive GPS dataset on 66 Canada lynx (i.e., 164,593 locations) collected during 2004-2015 within the Northern Rocky Mountains, U.S. We used univariate analyses and hurdle regression models to evaluate the spatio-temporal factors influencing lynx use of treatments.

Our analyses indicated that Canada lynx used treatments, but there was a consistent cost in that lynx use was low up to ~10 years after all silvicultural actions. However, cumulative use (in both winter and summer) by lynx reached 50% at ~20 years after a thinning treatment, whereas it took ~34-40 years after a selection or regeneration cut. This indicated that Canada lynx used thinnings at a faster rate post-treatment than selection or regeneration cuts, and that lynx used selection and regeneration cuts in a similar fashion over time. Further, we discovered that lynx occupancy and intensity of treatment use was influenced by the composition of forest structure in the surrounding neighborhood. In some instances, the existing forest structure surrounding the treatment and the time since treatment interactively influenced lynx use; a pattern characterizing a spatio-temporal functional response in habitat use.

This demonstrated that both the recovery time as well as the spatial context of a particular area are important considerations when implementing different silvicultural treatments for Canada lynx at the landscape scale. For example, if a selection cut was implemented with abundant mature, multi-storied forest (i.e., a preferred habitat by lynx) in the surrounding landscape, lynx would use these treatments less over time than if the neighborhood contained less mature forest. Forest managers can apply our spatio-temporal understandings of how lynx respond to forest silviculture to refine expectations and develop strategies aimed at both forest management and the conservation of Canada lynx.

The snowshoe hare (Lepus americanus) is a keystone species in the boreal forest because it affects the demography and population dynamics of many other species in the ecosystem.

Throughout Canada and Alaska, hare abundance fluctuates regularly over periods of 9 to 11 years. Hare population dynamics have a strong impact on specialist hare predators, such as lynx (Lynx canadensis), which fluctuate in response to hare abundance with a 1 - 2 year lag in their own cycle.

The numerous studies conducted since the snowshoe hare - lynx cycle was first described have improved our understanding of the mechanisms behind it. However, there are still unanswered questions on the role of food in the population fluctuations of both hare and lynx.

View more articles on Lynx canadensis in the IUCN Cat Specialist Group database (scroll down once the library page is loaded to see the list).