By the early 2000's the Iberian Lynx (Lynx pardinus) population had declined to less than 100 individuals, and the species was listed as Critically Endangered. Due to a huge collaborative effort by many European partners via an intensive breeding and re-introduction program, the Iberian Lynx populations recovered to over 150 individuals by 2012 and the status was later upgraded to Endangered. Nevertheless there is still much conservation effort required to prevent such a small population from easily falling into decline again.

~ Endemic to the Iberian Peninsula ~

The Iberian Lynx species belongs to the genus Lynx and the full taxonomy or scientific classification is:

The scientific name for the Iberian Lynx or Spanish Lynx, is Lynx pardinus; which is also known as the binomial name, species name, latin name, biological name or zoological name. 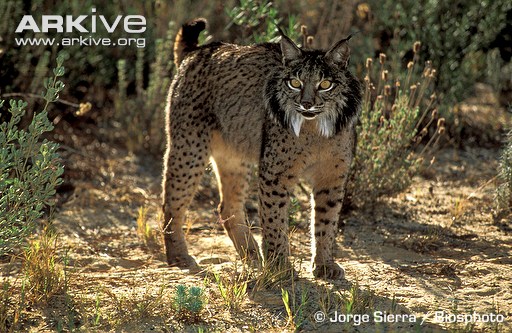 The Iberian Lynx has historically been recognized as a monotypic species (no subspecies) and this is still the case as per the last Felidae taxonomy revision in 2017. 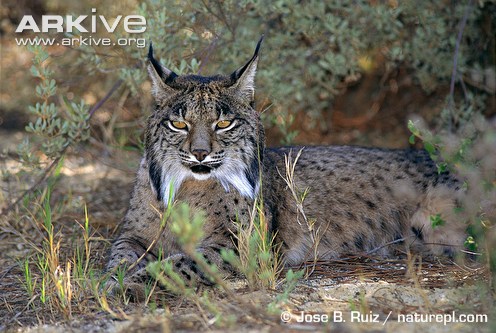 The following organizations have well researched and authoritative information on the Iberian Lynx (although some may still show the status as Critically Endangered):

These documentaries and video clips about the Iberian or Spanish Lynx are all freely available on YouTube.

Apologies in advance if any links are broken, as videos are removed from time to time. In this case, just search for the video title to find if it is available elsewhere.

*Year published on YouTube if not given in the video.

Here is a list of papers published on Iberian Lynxes. Click on the title bar to view the abstract and the link to the article.

Context: Species distribution models (SDMs) usually describe the landscape through single landcover types as explicative and independent variables. However, species distribution responds to ecological processes that are represented in spatial patterns of landcovers, which are not usually considered in SDMs.

Results: The species shows its preference for two out of eight identified mosaics. It shows preference for mosaics with low human-modified holm oak forests, but it does not show rejection of traditional land-uses such as pasture or non-intensive agriculture. The relevance of watercourses was also shown, since two of four mosaics with characteristic riparian vegetation prove to be relevant in the model.

Conclusions: As landscape includes spatial interactions (boundaries) among landcovers it is a more holistic descriptor than single landcovers. This contributes to increase SDMs performance and usefulness for designing more accurate conservation actions, compared to those based on single landcover composition.

There is the tendency to assume that endangered species have been both genetically and demographically healthier in the past, so that any genetic erosion observed today was caused by their recent decline. The Iberian lynx (Lynx pardinus) suffered a dramatic and continuous decline during the 20th century, and now shows extremely low genome- and species-wide genetic diversity among other signs of genomic erosion.

We analyze ancient (N=10), historical (N=245), and contemporary (N=172) samples with microsatellite and mitogenome data to reconstruct the species' demography and investigate patterns of genetic variation across space and time.

Iberian lynx populations transitioned from low but significantly higher genetic diversity than today and shallow geographical differentiation millennia ago, through a structured metapopulation with varying levels of diversity during the last centuries, to two extremely genetically depauperate and differentiated remnant populations by 2002. The historical subpopulations show varying extents of genetic drift in relation to their recent size and time in isolation, but these do not predict whether the populations persisted or went finally extinct.

In conclusion, current genetic patterns were mainly shaped by genetic drift, supporting the current admixture of the two genetic pools and calling for a comprehensive genetic management of the ongoing conservation program. This study illustrates how a retrospective analysis of demographic and genetic patterns of endangered species can shed light onto their evolutionary history and this, in turn, can inform conservation actions.

2012 Reverse of the decline of the endangered Iberian lynx

The Iberian lynx (Lynx pardinus) was declared critically endangered by the International Union for the Conservation of Nature (IUCN) in 2002, and the species is a flagship for conservation in Iberia.

Palomares et al. (2011) conducted an assessment of Iberian lynx conservation efforts and predicted imminent extinction due to poor management. These authors based their inferences on information collected before the most substantial conservation programs began and extrapolated data from a non-representative segment of the smaller of 2 remaining populations to model extinction probabilities for the species. The authors did not use available data from the first 9 years of an ongoing 14-year spatially extensive conservation and monitoring LIFE project (European Union funded projects for environmental and nature conservation) for the Iberian lynx. Thus, they overlooked substantial increases in lynx abundance, number of populations, and distribution over the past 5 years.

Here, we provide an overview of ongoing conservation efforts and the current status of the Iberian lynx.

View more articles on Lynx pardinus in the IUCN Cat Specialist Group database (scroll down once the library page is loaded to see the list).