The speedy Cheetah (Acinonyx jubatus) is very distinct from other cats and has many unique adaptations to enable it to chase prey at high speeds, being well known as the fastest land mammal. One of these adaptations is non-retractable claws that help it grip the ground when running, whereas most other cats have retractable claws. Cheetahs have declined drastically in the past century and now only occur in 10% of their historic range in Africa and a small population of less than a 100 in Iran.

~ Active during the day ~

Cheetahs are classed in their own genus Acinonyx and the full taxonomy or scientific classification of the cheetah species (Acinonyx jubatus) is as follows: 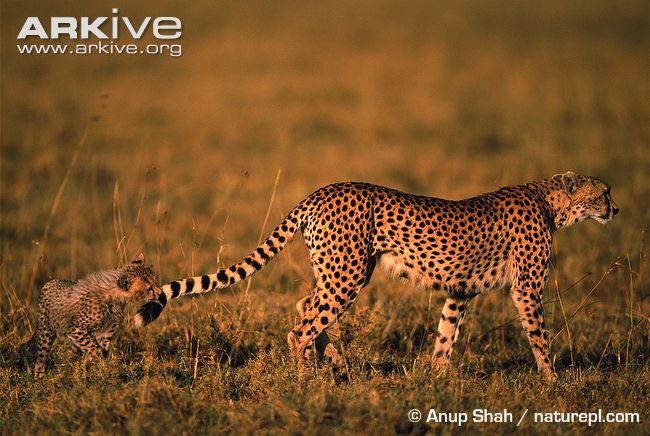 Five subspecies (or lower classifications) of Cheetah have been recognized in the past:

However based on genetic studies the last taxonomic revision of Felidae in 2017 proposed only four Cheetah subspecies:

The global conservation status for Cheetahs is Vulnerable (VU) and Endangered (EN) for the Mediterranean region. Two of the four subspecies are further listed as Critically Endangered (CR) - the Asiatic Cheetah and the Saharan Cheetah.

The following organizations are all fighting to protect our remaining Cheetahs, in the face of continuing habitat loss and fragmentation, persecution and illegal trade: 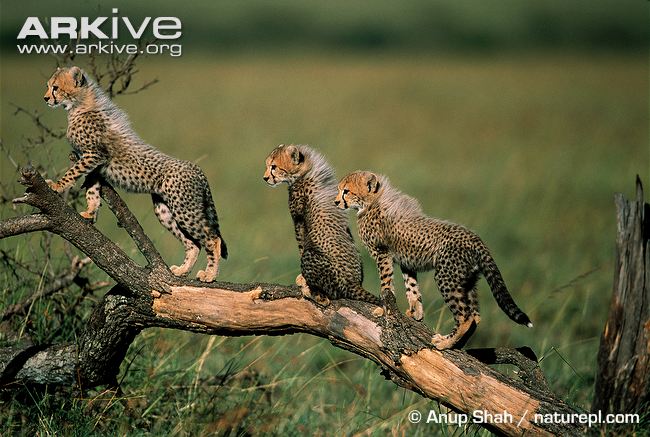 The following websites have well researched and authoritative information on Cheetahs:

Here are some papers published on Cheetahs. Click on the title bar to view the abstract and the link to the article.

Assessing trends in abundance and density of species of conservation concern is vital to inform conservation and management strategies. The remaining population of the cheetah (Acinonyx jubatus) largely exists outside of protected areas, where they are often in conflict with humans. Despite this, the population status and dynamics of cheetah outside of protected areas have received relatively limited attention across its range.

We analyzed remote camera trapping data of nine surveys conducted from 2005 to 2014 in the Waterberg Conservancy, north-central Namibia, which included detections of 74 individuals (52 adult males, 7 adult females and 15 dependents). Using spatial capture-recapture methods, we assessed annual and seasonal trends in cheetah density. We found evidence of a stable trend in cheetah density over the study period, with an average density of 1.94/100 km2 (95% confidence interval 1.33-2.84).

This apparent stability of cheetah density is likely the result of stable and abundant prey availability, a high tolerance to carnivores by farmers and low turnover rates in home range tenure. This study highlights the importance of promoting long-term surveys that capture a broad range of environmental variation that may influence species density and the importance of nonprotected areas for cheetah conservation.

Across the globe, wildlife populations and their behaviours are negatively impacted by people. Protected areas are believed to be an antidote to increasing human pressures but even they are not immune to the impact of anthropogenic activities. Areas that have been set aside for the protection of wildlife therefore warrant more attention when investigating the impact of anthropogenic pressures on wildlife. We use cheetahs Acinonyx jubatus as a case study to explore how a large carnivore responds to anthropogenic pressures inside wildlife areas.

Using GPS-collar data we investigate cheetah space use, both when moving and stationary, and movement parameters (speed and turn angles) in relation to human disturbance, distance to human settlement, livestock abundance and livestock site use inside wildlife areas.

Space use was negatively influenced by human disturbance, resulting in habitat loss and fragmentation and potentially reducing landscape permeability between neighbouring wildlife areas. Cheetahs were also less likely to stop in areas where livestock numbers were high, but more likely to stop in areas that were frequently used by livestock. The latter could reflect that cheetahs are attracted to livestock however, cheetahs in the study area rarely predated on livestock. It is therefore more likely that areas that are frequently used by livestock attract wild herbivores, which in turn could influence cheetah space use.

We did not find any effects of people and livestock on cheetahs' speed and turn angles which might be related to the resolution of the data.

We found that cheetahs are sensitive to human pressures and we believe that they could be an indicator species for other large carnivores facing similar challenges. We suggest that further research is needed to determine the levels of anthropogenic pressures needed to maintain ecological integrity, especially inside wildlife areas.

Considerable effort has been put into conservation of the critically endangered Asiatic cheetah Acinonyx jubatus venaticus in Iran during the past few decades, and a thorough review of the species' status, demography, range and conservation is provided here.

We collated a large dataset of all verified occurrence data, photographic records and mortality cases since 1980 throughout the species' range in Iran. Currently, the cheetah is distributed throughout the arid landscapes of the eastern half of Iran, but the limits of its current and past range as well as population trends are uncertain. Surveys of nearly 40 different areas resulted in 18 localities with confirmed presence of cheetahs in recent years. Camera trapping has been an effective tool to provide evidence of presence and status of cheetahs, revealing the species' extremely low density and long inter-reserve movements. Together with photographic records, a total of 82 different cheetahs were detected during the 2000s in Iran.

Protection status in most areas has been elevated by the Iran government. Asiatic cheetahs are highly vulnerable to extinction, mainly due to causalities mediated by herder persecution, poaching and road collisions as well as prey and habitat loss. Some efforts have been made to address these threats, but range expansion in recent years is a result of greater survey effort, rather than population recovery. We suggest that, despite conservation investment of the last 15 years, the species remains critically endangered on the verge of extinction.

View more articles on Acinonyx jubatus in the IUCN Cat Specialist Group database (scroll down once the library page is loaded to see the list).

The following organizations offer tours to Africa where you are likely to see Cheetahs in their natural habitat. These companies offer small group experiences, support conservation projects, and indicate their trips are environmentally and ethically responsible:

Always bear in mind that sightings of any particular animal in its natural environment are not guaranteed and the experience of guides will greatly enhance your success.