The Sand Cat (Felis margarita) is one of the few wild cat species occurring in very dry desert habitat. Large ears and thickly furred pads are special adaptations that allow the cat to detect underground prey and survive in extreme conditions. Due to the remote, harsh terrains of its habitat, limited research has been conducted and populations and actual ranges are mostly based on estimates.

Sand Cats belong to the genus Felis and the full taxonomy or scientific classification of the Sand Cat species is:

The scientific name for the Sand Cat is Felis margarita which is also known as the binomial name, species name, latin name, biological name or zoological name. Some use the term 'botanical name' however that term is only applicable to the plant kingdom (botany) and not the animal kingdom (zoology). 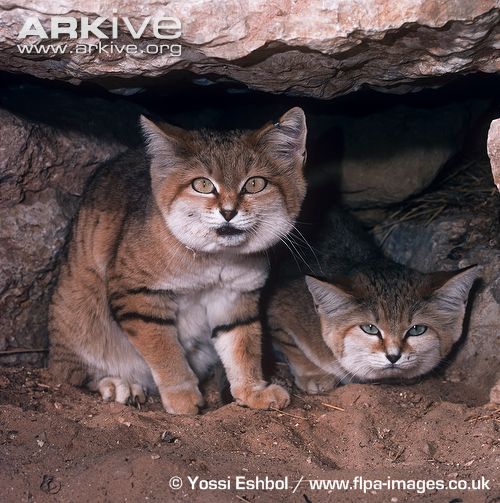 Four subspecies of Sand Cats have been recognized in the past, however the last Felidae taxonomy revision in 2017 proposed two subspecies, pending further research:

Here is a list of papers published on Sand Cats. Click on the title bar to view the abstract and the link to the article.

2017 Investigating abundance, density and potential threats of Sand cat in the South-Eastern parts of Iran

Sand cat is known as a rare species mainly due to the destruction of its habitat. Because of its nocturnal and secretive behavior, dense hair in the soles, and the overall characteristics of its habitat, there is little data about this species, especially in Iran.

In this study, like the general method for nocturnal mammalian species, spotlight surveying was used to estimate density and abundance of this species. During the study, 660 km strip transects in Samsoor and 615 km in the habitats located in Chahe-Hashem were traversed randomly. Data analysis was performed using Distance 6.2 which resulted that the density and abundance of sand cat in Samsoor area is 0.163 and 45 (CI: 29-72) respectively. Considering the recorded number of individuals and the length of the traversed transects, it can be inferred that the encounter rate with the species is equal with 0.04 individuals per km.

To investigate the effect of the moon status, we planned study design and covered all lunar nights. The results revealed that the highest rate of encounter rate with the species occurred at the initial and final phases of the lunar nights while encounter rate with the species was at the lowest level in two middle weeks of the lunar months (0.052 and 0.02 individuals per km respectively).

The increased agricultural activities, grazing livestock including camels and goats, and accompanying dogs are some of the main threatening factors. As a solution, we suggest establishing environmental force guard stations in the region and also employing some local people as wildlife protection guards.

A total of 46 photographs were obtained using five camera traps, during 278 trap nights, between March and December 2015. A total of three individuals were recorded of which one was confirmed as a male. About 80 % of the sightings were between 00:00 and 06:00 h, and 39 % were recorded during the full moon phase.

We report on the North African subspecies of the sand cat Felis margarita margarita and other desert carnivores in the Moroccan Sahara.

The study was initiated in December 2015 under the approval of the Haut Commissariat aux Eaux et Forêts et à la Lutte Contre la Désertification, and during 12 days of fieldwork, six carnivore species were observed: two felids (including the sand cat), three canids and one mustelid. The four sand cats seen, two males and two females, were captured, anaesthetized and fitted with GPS or VHF collars. We collected new morphological data, then followed two of them regularly, one less frequently, for several days and nights including observation of hunting sequences.

High quality photographs of the sand cats were taken and preliminary results on home-ranges and behaviour are presented here.

View more articles on Felis margarita in the IUCN Cat Specialist Group database (scroll down once the library page is loaded to see the list). 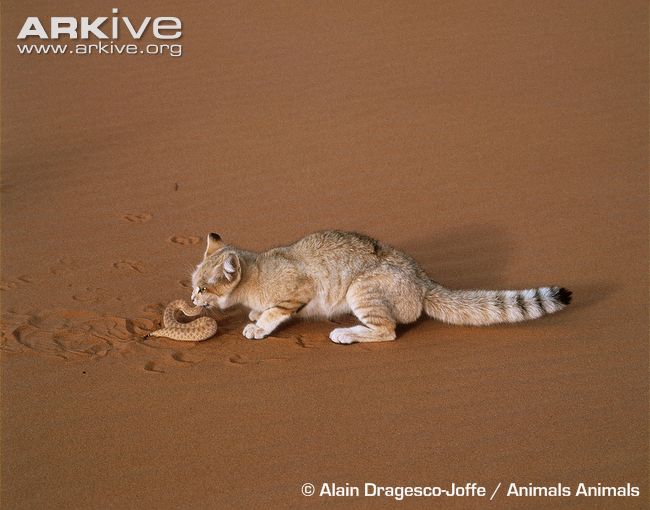 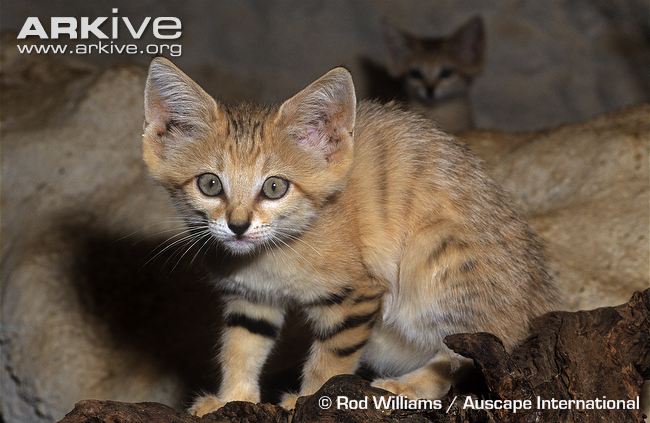 The global conservation status for the Sand Cat is Least Concern (LC) due to the wide range and estimated numbers, however it is not abundant anywhere and occurs naturally at low densities.

The following organizations are involved with Sand Cat conservation and research, either regarding the species directly or indirectly via programs within its specific desert habitat:


(some links may no longer be active)

The following organizations have well researched and authoritative information on Sand Cats: