The wide ranging Eurasian Lynx (Lynx lynx) is the largest of the four wild cats in the Lynx genus. Due to hunting for their luxurious fur, as well as persecution by farmers, they have been extirpated from large areas within their range. Some of the remaining isolated sub-populations are now severely threatened.

The Eurasian Lynx has one of the largest ranges across Europe and Asia with variable coat patterns across this range. The coat color and texture also varies seasonally - usually paler and thicker in winter and darker and thinner in summer.

The scientific name for the Eurasian Lynx is Lynx lynx; which is also known as the binomial name, species name, Latin name, biological name or zoological name. 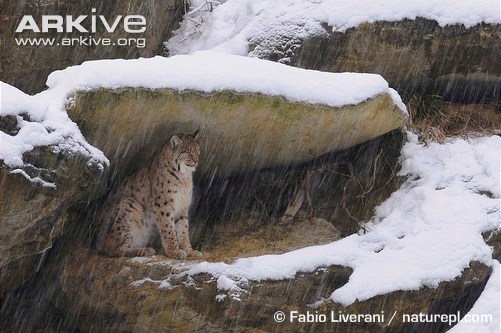 Up to eleven subspecies of Eurasian Lynx have been recognized in the past. However based on recent genetic studies, the last revision of the Felidae taxonomy in 2017 proposed six lynx subspecies:

The global conservation status for Eurasian Lynx is Least Concern (LC) and for the European region. However their status is Endangered (EN) for the Mediterranean region and the Balkan Lynx subspecies is listed as Critically Endangered (CR).

The following organizations are all involved in protecting the Eurasian Lynx. Projects include re-introduction to areas where the lynx have historically been eradicated due to persecution and the fur trade. 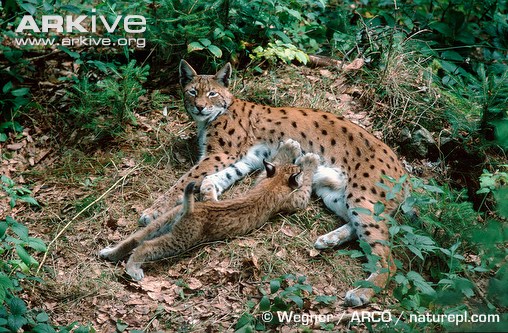 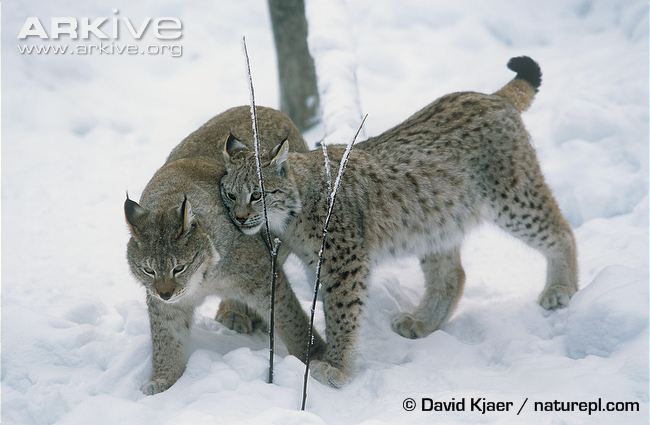 The following organizations have well researched and authoritative information on the Eurasian Lynx:

Here is a list of papers published on Eurasian Lynxes. Click on the title bar to view the abstract and the link to the article.

After having been extinct for approximately 200 years, the Eurasian lynx (Lynx lynx) is currently being reintroduced in several European countries. However, it still occurs in several local, isolated populations. Given the patchy distribution of its forest habitat within a human-dominated landscape, the formation of population stepping-stones, i.e., small lynx occurrences between source populations, has been suggested an important mechanism for the expansion of lynx in central Europe.

At the beginning of our study in autumn 2014, our study population consisted of a minimum number of six resident individuals of both sexes that successfully reproduced in the area. However, over the course of only a single year, this subpopulation declined to only a single resident male as a consequence of death and emigration. In the 4 years after this decline, the subpopulation did not recover due to the absence of female dispersal into the area.

Our study illustrates the vulnerability of small, isolated populations to stochastic demographic events and suggests that constraints on female dispersal are a major reason for the slow expansion of lynx in central Europe. To promote the expansion of lynx, active population management will be required, involving the translocation of females to reinforce existing stepping-stone populations or to create new ones.

The Eurasian lynx (Lynx lynx) is a large, but shy species of cat that depends on woodland habitat. Approximately 65cm tall and weighing between 12-35 kg, lynx became extinct in the UK during the late medieval period.

The potential reintroduction of lynx to Scotland has been the focus of significant recent debate, but any decision to proceed would need to be supported by comprehensive and favourable public consultations and robust scientific evidence.

Recent modelling work delivers up to date and reliable evidence that Scotland possesses sufficient, well-connected habitat in the Highlands to give a reintroduced population of lynx a good chance of success. However, this success is heavily dependent on the careful selection of appropriate reintroduction site(s).

This briefing paper summarises research that has developed a quick, safe and cost effective tool to explore the suitability of different candidate sites around Scotland for the reintroduction of lynx. Equally, this new approach can be applied to conservation management and reintroduction planning for both lynx and other species.

2018 The missing lynx of Eurasia at its Southern edge: a connection to the critically endangered Balkan lynx

In this study, we present the genetic characteristics of two isolated lynx populations in Southwest Taurus Mountains and the Turkish Caucasus as well as two individuals from Erzincan area. DNA purified from the ecological scat samples collected from Çiglikara Nature Reserve in Elmalì-Antalya and Allahuekber Mountains in Sarikamis-Kars, as well as two roadkill samples from Erzincan, has been analysed for phylogenetic markers such as the mitochondrial DNA control region and cytochrome b. The DNA sequences were compared with haplotypes previously detected in populations from Europe and the Caucasus in order to determine the evolutionary relationships of the populations.

This study compares the current genetic structure of some of the Turkish lynx populations to the other lynx genetic data, mostly carried out with museum samples around the world. Three haplotypes were found in three different regions of Anatolia. The Northeast and Southwest populations harbour genetically distinct haplotypes, the latter one, a new haplotype: H13-TR is the only phylogenetic connection to the critically endangered Balkan lynx yet to be described.

View more articles on Lynx lynx in the IUCN Cat Specialist Group database (scroll down once the library page is loaded to see the list).